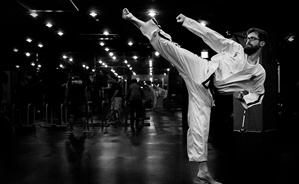 I completed a PhD in Taekwondo at Kyunghee University (Korea's premier university for Taekwondo studies). My focus was martial arts and Oriental philosophy. In particular, I researched the ethics of war and self-defence in Taoism, Confucianism, Buddhism, Mohism, Bushido and Shinto. (You can read more about my academic career on the Academic-page).

I have around 25 years of martial art experience and have been teaching for around two decades. Although I have a broad exposure to the martial arts, my speciality is in the Korean martial arts in which I have a 5th Dan in ITF Taekwon-Do, a 4th Dan in Hapkido (with master's certification from the Korea Hapkido Federation), and formal experience in Yusul (Korean jujitsu) and Taekkyeon.

For some time I acted as the 'International Relations Officer / Cultural Liasion Officer' (국제 교류 위원) for ITF-Korea. 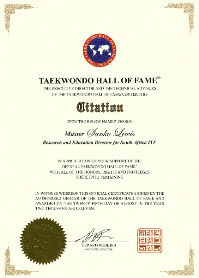 In 2011, I received an honourable mention ("citation") from the Tae Kwon Do Hall of Fame for my research work.

I am a contributor to Totally Tae Kwon Do Magazine and other magazines (such as Korea Magazine), and also maintain a martial art blog.

I furthermore give martial art and self-defence seminars / workshops, as well as lectures on martial arts and East Asian philosophy as it relates to the martial arts.

Feel free to contact me if you would like to invite me for seminars, workshops or special lectures. Private lessons are also a possibilitiy.